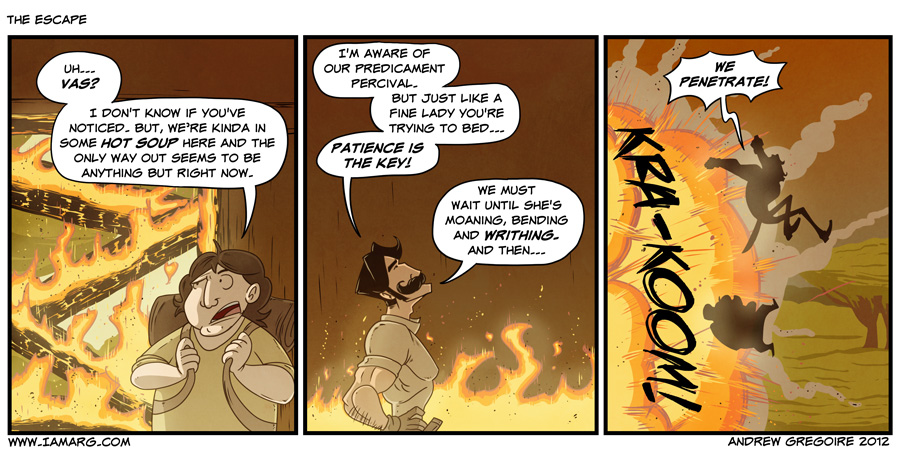 More of the Vas Deferens saga! The more I do this story the more I love it. Got some cool twists coming up.

So I am ARG is  just under a hundred votes behind in the NSFW Webcomic tourney!  If you’ve got two clicks to spare today, why not vote for I am ARG? A vote for ARG is a vote for the validation of penis humour.

Also there’s still plenty of time to take advantage of the I am ARG volume 1 Preorder bonuses!  There’s a couple of guest spots still available along with commission work and various other incentives! If we reach $7500 everybody who has Pre-ordered ($20 tier and higher) will recieve a set of 3 ARG Face Buttons and an ARG sticker!

I want to take a second and thank everyone who has supported so far. All the money goes back into I am ARG in one form or another. Whether it be hosting and advertising costs, convention costs, taxes (we all hate em), software costs or other incidentals. All of which will make a better comic!

The influx of support from all of you has made the past 2 weeks something of a dream. I’m afraid I’ll wake up and it’ll be last may again and I’ll just be posting the first comic oblivious to what’s in store. So Thank you for all your continued support!

I’m still waiting on quotes back from printers, but it looks like right now I’m going to be able to add extra pages to the book and increase the print run. Which is awesome! Also toying with some other things but we’ll see about that in the near future.