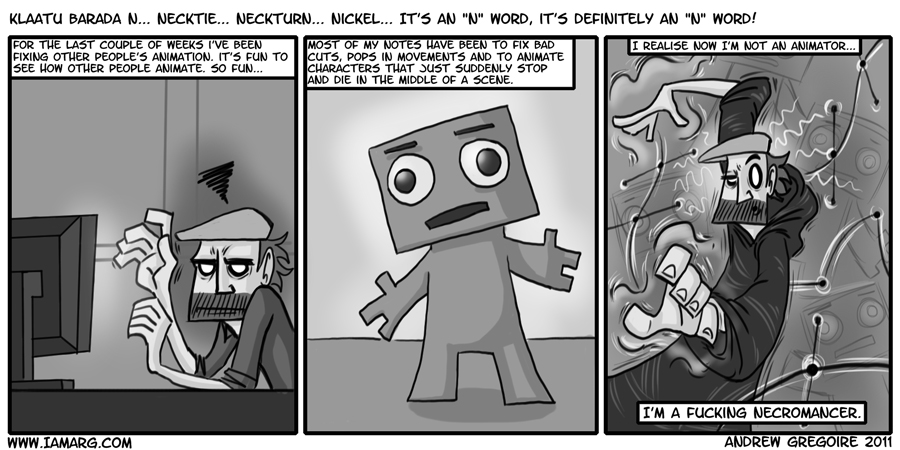 Yep I’m the re-bringer of life, the jump starter to dead animation curves. I’m an animation Necromancer. This comic is for my Animation buddies, but that doesn’t mean you can’t enjoy it too. Yes, even you Steve from Jacksonville, even you. The first panel may make it seem that I hate my job, I don’t. I actually enjoy my job, it’s better than diggin’ a ditch as my grandfather used to say.

I want to thank everybody who left awesome comments on yesterday’s comic about their experiences with Kinder Surprise Eggs. I never realized how far the Kinder influence ran. It’s nice to know Ferrero’s Master plan is chugging along nicely. MWAHAHAHAhahahaha….

So THIS is combines two of my favourite things. Bioshock and Lego. I love all the details. I have to get back into my lego collection. But there’s this pesky Web comic thing getting in the way. Can someone say Lego Columbia?

So I’ve got an idea, something I may post up tomorrow or Sunday. Maybe, I might take another week to flesh it out. My progress tonight will determine that.  So I’m going to try a beta run on this idea I’ve got. I just started writing it this week and It’s flowing so naturally, I’d kill myself if I didn’t get at least something finished.

Like always I’ve got a bunch of ways you can communicate, like the comments section I mentioned before. There’s also my Twitter, My Deviantart and you can vote for me on the side at the TWC thing if you’d like. No pressure…

I’d also like to point your attention to the INKOutbreak link on the side. I’ve been in Email conversations with the cool dude who runs it and it’s a pretty cool way to check out new comics you might like or promote your own. I believe the whole thing is still in beta but it’s a pretty cool site already. Give it a go.