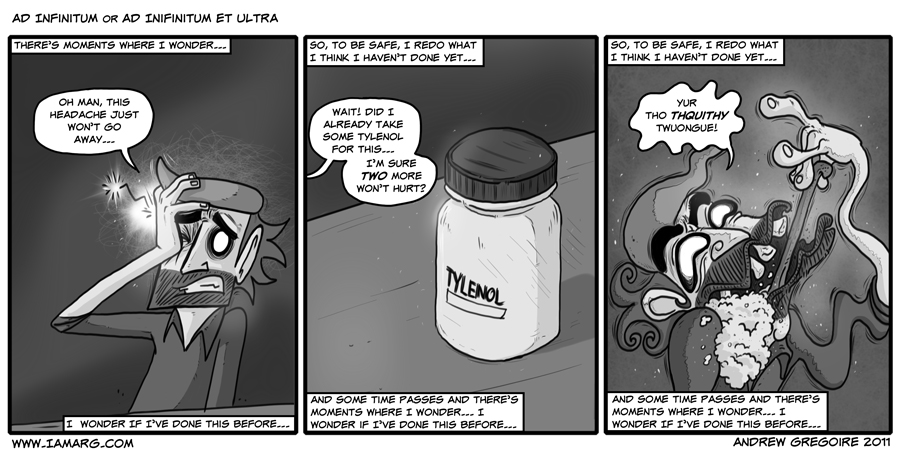 Welcome Extra Credits people! Feel free to enjoy the comic and please don’t be afraid to leave a Comment and check out the archive of comics!

Thanks to my friend Adi, I can feel safe in the idea that I’m not the only one this happens too… I can also thank Adi for bringing up this point to me over a innocuous Facebook status update, prompting me to essentially rewrite the comic in an effort to not appear as I had ripped off his status update… also I love that last panel…

Okay so the big thing I was working on and off over the last week is finally Uploaded and ready for your perusal. I did a video for Extra Credits, Which if you don’t know is an amazing web series that Dissects the gaming industry and explains the issues and presents plausible solutions to the issues. It’s one of my favorite web series and i’m super excited that it’ll be moving to Penny Arcade TV. so yeah something I helped create will be on PATV… That’s pretty cool. This episode was a pretty big one for them as it was their announcement of their Publishing fund. Basically they happened to raise a bunch of money in excess to help their regular artist with medical bills and and are starting a non profit publishing company! Check out the video it’s super cool.

WELL. It’s a new month and that means it’s ARG PIMPS HIS COMIC TIME! I know you guys have been asking to help promote the comic. well… you can by clicking the vote links on the side. Also those who have been doing that already THANK YOU! You guys mean the world to me. It’s great to have such awesome fans so soon in this comics life.