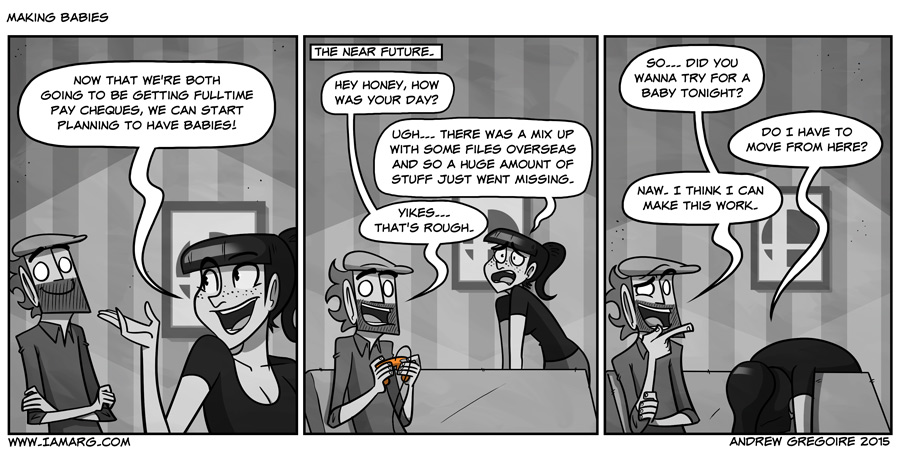 I posted this to the ARG Facebook group but for some reason some of you aren’t members. so here’s a little update about the comic.

TL;DR – New job, Time is tight, updates are now 2 times a week for the time being.

I don’t usually talk about the goings on in my life unless it’s humorous and then it’s used for the comic. And when I do, I like to keep it positive. But I feel the need to keep you guys, my faithful readers, apprised of some behind the scenes stuff.

Recently, I started a new job. It’s an animation gig and I’m loving it. I love to animate and this show’s style and subject matter is something I’ve never done before. It’s challenging and pushing my animation skills even further. I’ve had to learn an entirely new software package (ToonBoom) and it’s been a struggle. Brain’s a bit frazzled but I’m doing well. There’s been some late nights and early mornings. But we’re doing well. On top of that, I’m finishing up on freelance and other commissions. The reason I took these jobs are because, well, there’s bills that need paying and sadly I haven’t gotten my Bill-o-Vaporator Ray to work. When I do, I’ll share it all with you.

Now I love making the comic. It’s been my outlet and my support for almost 4 years now. It’s not going away. I just don’t want to arrive at a spot where I’m making comics just to meet an update. So right now, my goal is to update at least twice a week with the schedule of Monday and Thursday or Friday. This is doable for me and I feel the quality you guys have come to enjoy will stay consistent.

Thanks for your patience and support guys. Your laughter is one of the main reasons I make this fool of a comic.