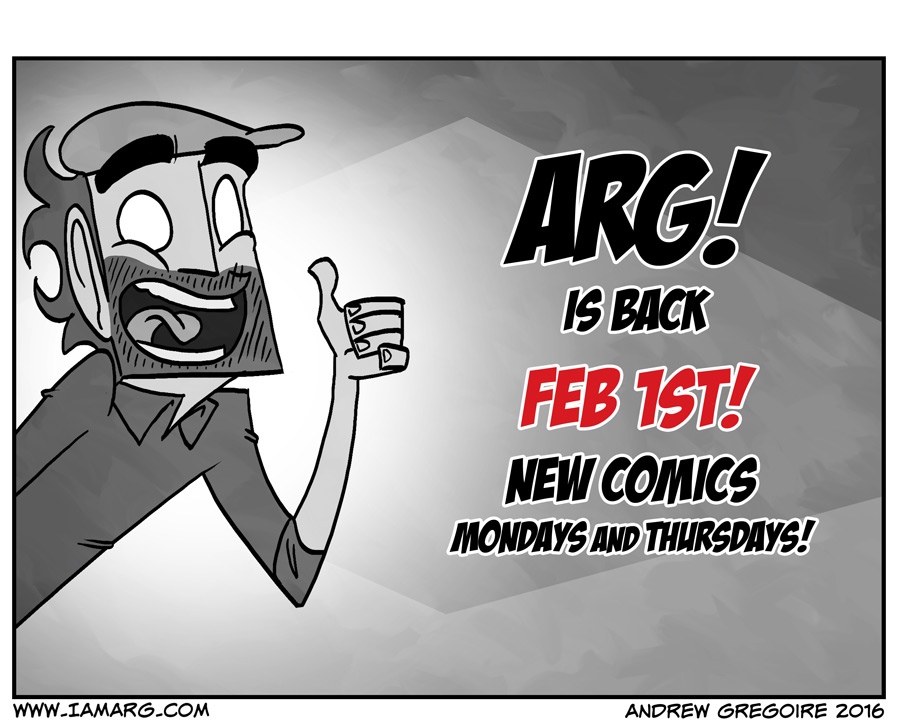 TL DR; ARG IS BACK WITH NEW COMICS FEB 1ST.

If you hadn’t noticed there’s been a lack of new comics the last 2 months. Why is that? Well… life got in the way. I don’t usually like to complain. I leave that for my twitter account, but I figure you guys would like to know what’s going on. First off, thank you to everyone who was concerned for my absence. It warms my dark heart to see such an outpouring of concern. I’m alive and well. Well relatively well. I’m temperate. I’m like a mild day, no wind, some clouds. Current mood: That stage your hair gets 2 weeks after a haircut.

Basically, it was burn out. I’m now a burnt husk of a human. Let me explain. I’m one of the few fortunate people that have the opportunity to make a living from not just one dream job but two dream jobs! For those not in the know. Outside of the comic I work as a full time Character animator for TV. It’s crazy to think that I’m in this position. A lot of people attribute it to me be an incredibly lucky human. I say it’s because I worked my ass off to put myself in a position to be an incredibly lucky human, but whatever… semantics. So yeah Two dream jobs don’t come without it’s share of downsides. A job is still a job. Regardless if it’s your dream job.  Jobs mean work and in my case, there was a lot of it.

Essentially since 2013 I’ve been working way too much. Most of 2013 and half of 2014 I was commuting at least 3 hours(sometimes 6+) a day to animate in another city. It was a great show and I don’t regret it, but damn that commute took it’s toll. (Not too mention I also got married that year) Then in 2014, I was off work and was basically doing nothing but freelance and the comic. If you’ve ever done freelance work you know it really means working for way less than you’re worth even after you’ve valued yourself fairly because somewhere along the line the client need ONE MORE CHANGE, but you’ve already finished the project and you’ve got 3 others due today and oh my god! WHY IS MY COMPUTER NOT LOADING MY EMAILS?

Luckily in 2015 I was able to land a pretty sweet animation gig. The only downside was I had to pretty much learn a whole new software suite on the job and still hit quota. It was long hours and weekends and a crazy schedule but I was excited for this challenge and happy with the end product. What I wasn’t expecting was the brain drain it was going to be.

There were nights where I would come home from working 10-11 hours and sit down to write comics and nothing would happen. My mind was mush. And so I just decided I need to focus on one thing at a time. I finished my contract on that show and took a much needed month off to recuperate and just get my head together.

So where does that leave us now? ARG is coming back. I’ve been writing and drawing new comics. I’ve decided that FEB 1st would be an acceptable day to relaunch. The schedule going forward is going to be Mondays and Thursdays. I’m excited to make and post new stuff. I’m excited to do the con circuit again (More on that later).

Thanks to everybody that’s been worried about the comic and me. ARG is coming back.